Coronavirus Update: We care about your health and continue to service our customers safely. Read More

Serving the Snellville, GA Area Since 1988 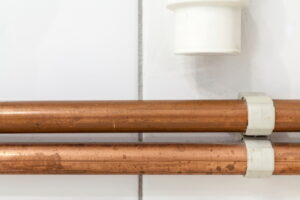 The name pinhole leak sounds like a minor issue. Big, gaping leaks in plumbing, leaks that send water spilling out all over the floor and make you glad you have a sump pump, sound like serious problems. And they are. But pinhole leaks are something those big leaks aren’t: sneaky and hard to find. You may not know you need a Lawrenceville, GA plumber at first to solve your pinhole leaks, and that’s how they can cause plenty of damage.

But, aside from their size, what exactly are pinhole leaks and how do they get started? And how can you notice them?

Pinhole leaks are a result of corrosion on copper piping. If you know a few facts about copper pipes, one of them is that they’re “corrosion resistant.” That doesn’t mean they’re corrosion-proof. They resist most forms of corrosion, but a specific type that can affect them is formicary corrosion. This corrosion is caused by a chemical reaction, either from chemicals in the water in the pipes or in the air. Although scientists aren’t 100% certain of the cause of formicary corrosion, it’s likely connected to formaldehyde.

Formicary corrosion weakens a small patch of copper, turning it gray. The weakening is enough to allow for water to begin to escape out tiny leaks. The leaks are small—the size of pinholes—but there are often many of them located along the pipes. If formicary corrosion is occurring in one spot on a pipe, it’s likely occurring in other places.

Pinhole leaks can account for a large amount of water waste over time. Not only do they waste water, but they also create water damage. Leaking copper pipes are often behind sections of drywall or in ceilings. The water accumulates and leads to the development of mildew, which eats right through drywall. The high moisture from pinhole leaks also contributes to wood rot and mold.

There are signs of pinhole leaks to watch for that will warn you it’s time to call a plumber:

If you can see some of your copper pipes, look for signs of “dimpling” or splotches of gray on the surface.

When you call us to look into pinhole leaks in your home, we’ll use special leak detection equipment to narrow down where the problem is. We can then cut out and replace the affected section of pipe. However, if the problem is widespread, we may recommend more extensive repiping, as well as a water treatment system to remove the chemical problem in the water that’s leading to the corrosion.

At Snellville Heating, Air and Plumbing, “Your comfort Is OUR Business!” Call us to solve any plumbing problem for your house.